The New Twitter – How is it Better than the Earlier Version

The internet space has become very competitive and even popular sites have to keep reinventing themselves to ensure that their users don’t lose interest in them. Take the case of Twitter. With millions of followers, there was no reason for it enhance some of its features, but it has done so and it must be said that the new re-engineered Twitter is a step up as compared to its earlier version.
Let’s take a look at the some of the changes that you will see in the new Twitter 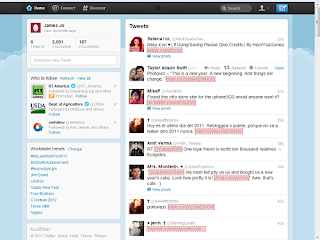 A New and Improved Design
Twitter users will now get the benefit of cleaner timelines and richer details pages whose aim is to enhance the impact value of the Tweets. One important problem that the design sorts out is that users no longer have to keep clicking ‘more’, for viewing additional Tweets. Twitter now offers users an infinite scroll, which means they just need to scroll down to view Tweets.
More Media Friendly
Let’s face it, we all thought, Twitter needed to a bit more media friendly and now it is that and much more. Now, viewing embedded photos and videos can be seen directly on Twitter as it has partnered with plenty of sites such as YouTube, yfrog, USTREAM, Justin TV, DailyBooth amongst various others.
Content Related to Tweet
You definitely wondered when Twitter will cotton on to the fact that the Twitterati want to know more about the person making the Tweet. But there is absolutely no need to wonder any more. Now, all you need to do is click the Tweet, and you get to know more about author or more details about the subject. Not only this, but you also get to see replies, other Tweets from the user, and much more.
Truly, the Twitter upgrade has given much more than the users hoped for. This is the mark of a social media site that cares about the user and makes the necessary changes to help them optimize its use. Albeit the changes will roll out in a phased manner and only a few registered users will have access to these changes as they changes are put into practice, over time everyone will experience the benefit of the updated version of Twitter.
The updated version can be used by both businesses and individuals in many different ways in order to build a more loyal network by improving their Twitter profile and consequently their reputation. Long Live Twitter and Long Live the Twitterati.
Share