The Android Market is now Google Play – What Does it Bring to Users?

Well, its good days for Android users. Not only is the OS making waves in terms of its popularity and usage, but also  is offering users plenty of new things when it comes to the its market for apps. What earlier was called the Android Market is now called Google Play, which incidentally also tells users that most, if not all of the growth experienced by the Android as a whole is being powered by Google. But, that is a discussion that is best left for another day. Let’s take a look at what the Google Play offers users: 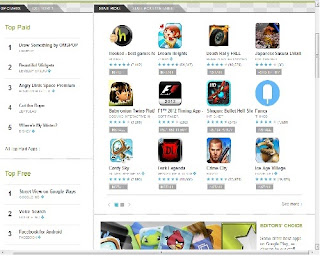 One stop shop for all Entertainment
Google Play offer users all the entertainment at one place, and when you are here, you don’t really need to go anywhere else, to search for your app. It has more than 400,000 apps cutting across all categories and there is something for everyone on Google Play. Also, it’s made the hunt for the right app all the more convenient, interactive and engaging. So, before you download your Android app, you can sample it with it’s a song or a book; or you could go through its ratings and reviews and do a whole lot more. This allows you to make an informed decision when you choose your app.
Cloud Support
Now you can access your favorite app store from just about anywhere. More importantly, the fact that it’s now integrated with the power of the cloud means you can download the apps from anywhere and sync it with your Android devices or with the device that you want to use at that point of time. For e.g. if you download a book on your Android phone, you can immediately read it on the web or for that matter you can also read it on your laptop. So, your entertainment now is not just restricted to the Android devices that you might be using, but you can now read, listen, and watch the content you want from just about anywhere and everywhere.
For those who love sharing
Everybody loves sharing their favorite apps with people they know. Google play makes it all that much easier for you to do so. So, if you find a utility app that you know is something that your friend wants desperately, just share the link with your friends, through Google+. Sharing is no longer a difficult exercise. It’s as easy as eating cake.
So, there you have it, just some of the great things that Google Play brings to its users.
Share