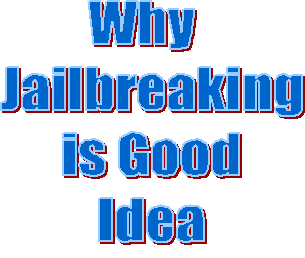 Here are 3 reasons why I think this is the case:

Make no mistake; I love everything about Apple and the devices’ that it brings to the table. But the problem lies in the fact that the company exercises a firm control on what the iPhone can do and what it cannot do. One of the biggest reasons for this is the fact that the company wants to maintain the highest standards of quality and consistency of performance. But, at times, this can get on your nerves, and you want to just break out of jail, and this is why Jailbreaking is a darn good idea. It allows you to do all that, your trusty iPhone otherwise cannot. This doesn’t mean that I want to prove a point or something, but it’s just that I want to rebel against some of the limitations of the iPhone.

Now, there is an erroneous belief going around that third party apps available for jailbroken iPhones are cheaper than those available on the iTunes store. Well, first up I want you to throw such beliefs out of the window, as some of these apps are way more expensive than their counterparts on the iTunes store.

Now that we have got that out of the window, I love the whole concept of Jailbreaking, because it allows me to access terrific apps that are not found on the iTunes store. These could be apps that were rejected by the iTunes stores, or might be providing features that for some reason or another are frowned upon by Apple. There are plenty of innovative iPhone apps available on Cydia and Icy, two very popular unofficial app stores; one look at them and you will want to jailbreak your iPhone in double quick time.

There are times when even the most passionate supporter of the iPhone will find its user interface boring and “uncool”. One of the many reasons that I jailbroke my iPhone is that it allowed me to give a facelift to my iPhone’s UI. I can do some great things with all the apps that allow me to change my UI. I know this might sound like a reason that is frivolous at best, but believe me, after you have been using your iPhone for some years, you will feel the need for bringing to its UI a new and improved look and feel. And only a jailbroken iPhone makes this possible.

So is this it? Of course it isn’t! There are plenty of other reasons why you must jailbreak your iPhone. But, a word of advice, it is important that you take an informed decision while doing so. So, learn about its pros and cons in an in depth manner, before you take your decision.