So the tech town is desperately waiting for the new iPhone 5. But what we hear from the market is that the wait is more owing to the hush rumors about the soon to be launched Nexus 7 Smartphone techno geeks have admitted that these two rivals when come down to the battle field, it will be no short of a bloody war! 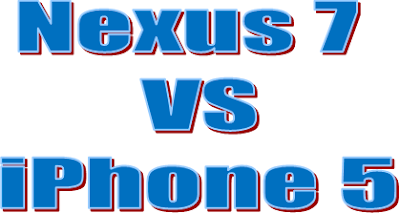 Apple and Google weren’t always enemies at each other’s gates (pun intended!), but with the expansive measures taken by both the companies in order to develop and advance their own brand hassled to an overlap of interests leading to conflicts.

Inception and there on

Initially Apple and Google used to be on great terms. The then face of Google was predominantly as a search engine and that of Apple was in the industry of mobile handset manufacturing. These two industry giants understood and accepted how their mutual symbiosis could prove to be beneficial for them both and therefore joined hands for many user experiences.

Apple created the devices and Google focused on iPhone apps development of its own products, which they co released. For example, Google would make an app of Google maps that was compatible to be run on the iPhone as its inbuilt app. Since Google was a major recognized source of information, Apple users loved the ease of access.

Eventually down the years, Google began to grasp the potential of the mobile market. It is no hidden stories that more and more people are being drawn to mobiles and tablets for all the activities that they earlier performed with their traditional desktops. This is where the birth of Android is credited to. Instead of delving straight into hardware, Google ventured in the markets of Mobile operating Systems creating Android, a mobile operating platform that has gained immense popularity in the recent past. Mobile Application development for Android took the market by a storm and more and more buyers were won over.

On the other hand, Apple who had already spent a lot of time in the industry as the Smartphone manufacturer was also producing his own operating system particularly to be used on his handsets. Apple too kept on bringing version after versions of both handset and operating systems from his initial iOS to the soon to be launched iOS 6. This was a situation that surely marked an overlapping industry interest for Apple and Google where both the companies were subtly, if not fully, heading for the common goal.

In spite of all this Google was reluctant in venturing into the mainstream hardware production. However, with Google’s recent launch of the Google Nexus tablet a promise of many more interesting handsets by Google has ensued silently.

Has this hard step angered Apple? Well, I guess only time can tell.

The actual War cry can possibly be said to have thrown in by Apple that removed the Google search from its latest handset and replaced it with its own Apple search. What’s more, the Google maps too was stripped off the latest phone and replaced with an Apple version of the maps called Apple Maps.

After all this happened, you’d think it would stop, but no, Apple took it a step further, by completely removing the YouTube app that has always been there in the phone right from 2007 when it was initially launched.

Hustle Bustle and a pinch of salt

Some Google experts and Apple spokespersons have commented that the YouTube application has only been removed “temporarily” while Google is working on an HD version for the new iOS. I don’t really know if believing them is a good idea, but if it is so, it is surely good news for the Apple users because a new YouTube version is sure to be a success.

The new Nexus 7 has surely stirred the population because people all over the world have shown a great response. There are rumors that Google is soon to launch a whole new range of pocket friendly smartphones. People claim that the fact these handsets are so economical, it will surely gain tremendous popularity.

However, the Apple user community has a strong lobby too, and the loyalists will always be the loyalists. An Apple spokesperson claims that there is no reason why an Apple user will ever turn to another device. He states that they believe in keeping their customers happy by maintaining the standards that come at a price, rather than lowering their standards to trick more and more customer into buying their products. Okay Apple, we saw what you did there!

About Author:
“This article is written by an expert analyst of iPhone App development currently associated with Viteb, a global leader in web and mobile Application development. Their reputation grows far and wide across the world owing to their expert developers and designers and industry expertise.”