Developing a mobile app is not an uphill task anymore; the diverse range of advanced tools and technologies available in the market makes it possible for anyone and everyone to develop high-end mobile apps. However, there are certain mistakes, which developers tend to make while developing their apps. Let’s take a look at some of these mistakes, which all mobile app developers should avoid at any cost.
Many developers, especially those who are new to the field of mobile app development, can’t wait to start coding their app as soon as possible! They forget that the app development process is a linear one i.e. one step follows the other; there are many steps for them to take, before they actually start coding their apps. 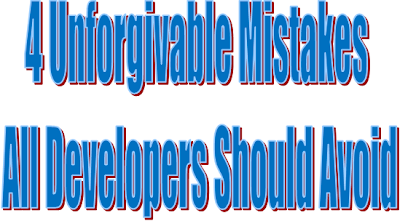 For instance, they should first work on the concept of the app, make a clear strategy about its development with the client and collaborate with other professionals working on the app (if any) and only then make the next move. Once they have created a roadmap and are clear with the purpose of their app, they should go ahead and start coding it.
Let’s face it; no one really develops an app for hobby. Maybe some developers do, but most of them don’t. So, for developing an app that reaps rich dividends, you need to identify those apps, which will compete directly with the apps you will develop. Identify their strengths and weaknesses; this will help you create an app that doesn’t make the mistakes that the other apps already available in the target niche have made. This improves the apps chances of success.
For this reason, you need to carry out an in-depth research and find out about such apps, what are their prominent features and functionalities and their target audience. This will also help you create an app, which will be different than the apps in your competition. After all, there is always room for innovation on various mobile app stores!
Just because various mobile app developers are in a haste to develop their apps and release them in the market, they miss out important aspects in their app. Here are two such important points, which they miss out while creating their apps in haste:
In conclusion
These are some common but unforgivable mistakes, which developers tend to make while working on their mobile apps. So, if you are a developer and reading this article keeps these points in mind, try not to repeat them when you work on various mobile app development projects in the future.
About The Author:
“Carlos is a developer with MyFirstMobileApp.com and has experience in both Android and iOS platforms. An outgoing person, he likes to connect and network with people related to his field of work and otherwise. Writing is something else that interests him. He likes to write on different technical topics and shares his write-ups with the rest of the world through various guest-blogging platforms.”
Share