Android Vs iPhone – Which Smartphone Is Better?

This is a very difficult question, mainly because each Smartphone has different qualities, and neither phone is vastly superior to the other. There are things such as app availability, background processes, most adaptable, etc, that vary from Smartphone to Smartphone. Just because the iPhone has more apps does not mean that the apps for the Android are in anyway limited. Just because the Android allows more background operations does not mean that iPhone users will have to spend longer on their iPhones. 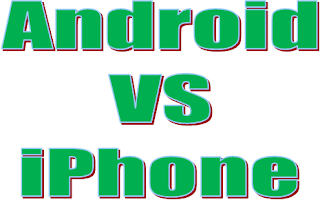 So how do we judge them? It only seems logical that we lay out what qualities each one has and then allow you to make the choice for yourself. Your situation and mindset will determine which qualities are the best, which will help you in deciding which one you want. For example a 15yr old boy may consider the fact that one has more games to play as being a major plus, where as a cash strapped 25yr old woman may consider the fact that one of them offers cheaper accessories to be a major plus.

Not all of America has 4G yet, but both the Android and iPhone 5 support it. So if you are looking for faster internet speeds then both buy either an Android or the new iPhone 5.

The iPhone has always maintained its 3.5 inches size. This may be because it makes it easier for the app programmers to plan their app development. They have bumped up the size of the iPhone’s screen to 4 inches with the iPhone 5. The Android however is available in many sizes. If we just consider the Android on Smartphones, leaving out tablet devices, we see that you can buy an Android Smartphone with a 3.5-inch screen–all the way up to a 5.3-inch screen.

The use of Flash is allowed on the Android (tablets and phones) but the makers of Android say that Flash will not be integrated into Android version 4.1 or above. Apple has never allowed Flash on their phone or tablets because it uses too much battery life. At the moment you are able to find Androids’ that can use flash, but in the future you will have to accept that neither your android nor iPhone are going to be able to use Flash.

The battery life of an iPhone has always been one of the manufacturer’s primary concerns. The people at Apple know that people cannot afford devices with batteries that last weeks. They would push the price of their devices into very restrictive areas. Therefore they endeavor to make their devices more energy efficient. This is one of the reasons why they will never allow the use of Flash on their websites. It is also the reason why so many background processes are not allowed on iPhones. You will find that you can rarely multi-task more than three things at a time (unless you have very specific apps that allow this).

This lack of background processes (amongst a few other technological reasons) means that the batteries for iPhones will last longer than those of an Android. In most cases however you should expect the battery of your iPhone or Android to last around eight to ten hours. Don’t forget with your Android that the bigger the screen then the faster the battery will run down.

There is currently a belief that an Android Smartphone will not have GPS unless it is higher priced. It is true that there are so many Android phone models that this may be true in some cases. The Androids that are priced at the same price as iPhones will all have GPS; it is only the very cheap Android phone that may not have it. The iPhone also has GPS.

There are over seven hundred Android models and most of the apps that are out for the Android will work on almost all of the models. Nevertheless it is harder to create an Android app than it is an iPhone app, because you have to make it as compatible as possible with all the types of Android. There is also the fact that some Android apps are created to be free, which means that some developers are not making money on their apps because people can get their competitors for free.

About The Author:
“My name is Sonia Jackson. I represent the web-site http://www.custom-essay-writing.org. We’ll help you to solve all problems with writing different essays and research papers in a short time; we’ll answer all your questions and give you useful advices.“
Share