Google has announced launch of its two new devices: Nexus 4 Smartphone and nexus 10 tablet. The products are being launched in joint venture with Samsung and LG. Google’s Android is the software used in both devices. When both these devices would be available in the markets, at what price and with what features? Here are the details that need your attention if you are Android fan and want Nexus in your possession. 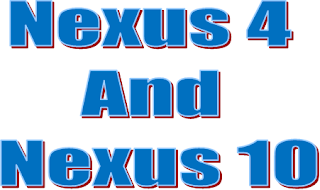 Nexus 4 has been the long awaited device. It would be available at cheap rate compared to all other smartphones. It’s SIM free and will cost you just £239. With 4.7 inches big screen, Nexus 4 is 8GB, having 768×1,280-pixel display. The specs resemble Samsung Galaxy S3. For higher storage range, 16GB Nexus 4 is available at £279.

Nexus 4 will be available in the markets from November 13. O2 might be the main contractor for the device. The network won’t let the budget become a burden over users’ wallet. If you want some other carrier, then buy the SIM-free device and then switch to monthly SIM based contract.

It’s a 10-inch tablet, ventured by Google and Samsung. Screen resolution is 2,560×1, 600-pixels, which is much better than the retina display of Apple’s iPad.
The storage options of Nexus 10 are 16GB and 32GB, costing £319 and £389 respectively. Although, it’s expensive than Nexus 4, but still it’s reasonable. Other specs of Nexus 10 are:
Nexus 10 will be released on November 13, the same date as that of Nexus 4.
Aren’t these devices wallet-friendly? Are you fed up from Apple’s high claims about iPhone 5?
Don’t you like iPhone 5 because you will have to buy unlock iPhone 4s software to access maximum features?
If, yes, then book Nexus 4 or Nexus 10 before time. Your Android experience would be unrivaled, as promised by Google and its venturing partners, Samsung and LG.
Share