Mobile technology has evolved at a rapid pace in the past few years and it is safe to say that it is at its peak now. This can be attributed to new mobile technologies, mobile operating systems, mobile apps and mobile handsets, which are being launched in the market every other day. Nowadays, mobile devices have become an essential part of users’ lives since they serve numerous purposes such as web browsing, video conferencing, watching a video or playing games. 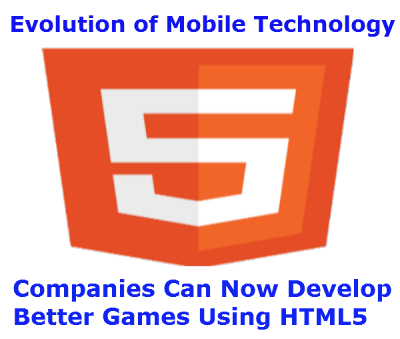 Speaking of games, game lovers in particular are having a field day playing some of the best mobile games till date on various mobile platforms. This in turn pushes game developers to develop better various native and web based games for end-users using the latest technologies.  One of the prominent tools (or rather web standard) used for developing web based games is – HTML 5.
HTML 5: How does it help develop better games?
HTML 5 consists of rich features and functionalities that allow developers to create web apps with cross-platform compatibility.  It came into the limelight when Adobe stopped providing Flash support for mobile browsers way back in 2011. This made HTML 5 the mainstay of interactive and dynamic web apps, although it is still at its nascent stage. Additionally, it offers numerous benefits to both users and developers, which make it the torchbearer of futuristic game apps!
For instance, a number of top websites are developed using HTML 5. These websites are interactive, fun and most importantly they can be viewed on any latest browser without even downloading a third-party plugin, which was not the case with Flash. This holds true for web based games too; users can enjoy them seamlessly without even reinstalling their games or beginning from scratch when they switch their device!
Another huge benefit of HTML 5 is that it is not necessary to install and run HTML 5 games and they can also be cached permanently to a device after downloading a few necessary resources. This will in turn facilitate offline play for both single and multiplayer games.
From the developer’s point of view, HTML 5 provides better error handling, replaces scripting with more markup and makes it easy for them to code web pages. It is not just one but many steps ahead of its predecessor with better elements, attributes, provides excellent web storage options and local SQL database, special audio/video tags that are easy to implement, offers 2D/3D support and a special type of media element called the Canvas that works magic for graphic elements.
But the best part is that HTML 5 is quite easy to learn and implement. This means that developers simply need to be thorough with this web standard along with other game development technologies and create better games for their company in the near future.
To conclude
Although it helps develop some of the amazing web based games, HTML 5 still has a long way to go. However, for the time being, game development companies need to focus more on training their developers to perfect it and build better, engaging games to the users.
Share