Best Smartphones Available On The Market

It’s the second quarter of 2013 and already, the market is teeming with a number of outstanding smartphones waiting to be picked up. If you too are looking for owning one of these smart gadgets this year, this is the best time to do so. To make your task easy, here is a list of some of the best smartphones available on the market. 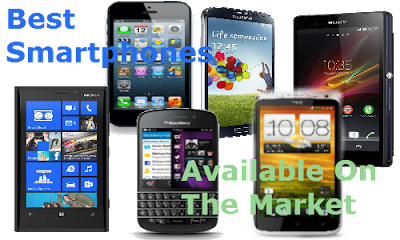 HTC ONE X
HTC ONE X is the first smartphone on this list. It’s a neat gadget that offers a splendid 8MP camera with rapid-fire continuous shooting and simultaneous 1080 HD video recording/imaging. Combined with HTC ImageCHip, you get some of the greatest shots possible irrespective of the light conditions and movement. Talking of audio, this smartphone consists of Beats Audio™, which makes each sound you hear rich and authentic.
The design is minimalist that includes curved glass with 4.7” Gorilla Glass screen and a piano gloss sidewall. You can avail it in two versions viz a 1.5 GHz quad-core or a 1.5 GHz dual-core LTE version. The platform is Android 4.0 with HTC Sense 4. Additionally, you get 25 GB of Dropbox space (integrated into HTC Sense) free for 2 years.
iPhone 5
How can any smartphone list be complete without mentioning the latest Apple’s iPhone! This is why iPhone 5 is on this list. The latest offering by Apple has a 4” Retina display along with an extensive range of apps developed specifically for it. It includes Siri – the voice based personal assistant and an 8 MP iSight camera that now lets you do so much more, including taking panoramic photographs. Additionally, the combination of powerful A6 chip and iOS 6 simply enhances its performance and takes it to a new level altogether. And as we all know, an iPhone is a high-end smartphone, so be prepared to cough up a few extra bucks if you are eyeing it.
Sony Xperia Z
Sony Xperia Z is the “best of Sony in a smartphone” or so it claims. This new offering from the XPeria line of devices, consists of a 13 MP HDR video camera, which allows you to take crystal clear photos and videos irrespective of the ambient light. With a 5” screen and a sleek 7.9 mm body, Xperia Z consists of a reflective glass surface, which makes it look elegant and stylish. And although the body is sleek, its tough as metal since its frame is made out of glass fibre polyamide and is dust resistant. However, what I really like about it is the Battery STAMINA Mode, which allows you to improve your standby times as much as 4 times or more.
Also worth mentioning is its water resistance; the official website claims that it has a high waterproof rating as compared to other smartphones in its league! It consists of NFC technology, which means you can easily share and view content on your smartphone with just one click. Exciting isn’t it?
Galaxy S4
Samsung’s Galaxy S4 is next on the list. Its bigger, better and more exciting than its predecessor – Galaxy SIII. With a 5” Full HD Super AMOLED display, the S4 consists of a whopping 1.9 GHz Quad-Core Processor (or you can opt for a 1.6 GHz Octa-Core Processor) and has Android 4.2.2 operating system. Also, looks like Samsung has worked on the camera features since it consists of 13 MP auto focus (zero shutter lag) rear camera and a 2 MP front facing one (full HD, zero shutter Lag), with numerous camera features, which includes but are not limited to Panorama, HDR, Sports, Night, Animated Photo and 360 Photo!
As expected, it comes with variety of Google Mobile services but what surprises is its sensors, which consist of –accelerometer, RGB light, Geomagnetic, Barometer, Temperature and Humidity to name a few. Also, there is a feature called Air View, wherein you just need to point to the screen without touching the glass and you will instantly get a pop-up view of something. Samsung fanatics, the S4 is what you must own this quarter.
Nokia Lumia 920
Touted as the “most innovative Lumia”, Nokia’s Lumia 920 does offer many new features and functionalities to its users. It consists of a colorful unibody design packed, Carl Zeiss lens with PureView technology and a 4.5” PureMOtion HD+ display. Also, with its HERE City lens, you can discover the city around you simply by looking at your camera’s viewfinder.
The best part however, is the wireless charging for which Nokia offers an entire range of Qi-compatible chargers to opt from.
Blackberry Q10
If touchscreen smartphones are not your cup of tea, then you have an answer in Blackberry Q10 – the latest offering by RIM. Although it is a bit expensive than Samsung, HTC and wait for it…the iPhone 5, it is worth buying for its specifications.
Although there is not much difference in the looks department, the curved keyboard now gives way to a new straightened one and the metallic frets that once separated the rows of characters are now slightly raised. This means you can work your way around the keypad easily now. That’s about it. If you are looking to upgrade an already existing Blackberry device, the Q10 is a safe bet.
To conclude
So, these are some of the best smartphones that you can avail. If you are still not sure which one to opt for, I suggest you go to the nearest mobile store, see them and if they fit the bill, take a call to action. Happy buying!
Share