One would be taken aback if it’s about to choose either the innovative Samsung’s Galaxy series or the obsessed Sony’s Xperia series. No wonder, the Smartphone rage is on full swing! Consistently doing incredibly well, Sony mobile has launched back to back wide range of Xperia series handsets. Sony Xperia J is one such new sibling in the family.
On the other hand it’s the Android giant; Samsung has left no space to encapsulate every aspect in its featured class of phones. Faceoff between the two will certainly open up many options for the people to go with. 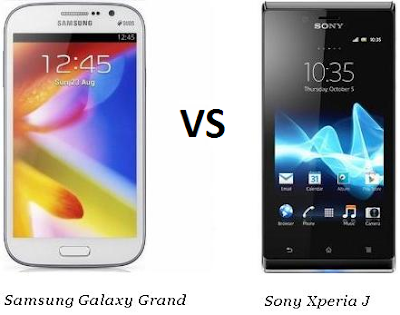 1. Processor:
Taking a nod from the information driven era, the phone is powered with Dual-core 1.2 GHz processor which is coupled with 1 Gigabytes of RAM, which offers swift multi-tasking at amazing speed. Certainly, it stands out as a power packed Smartphone.
Whilst on the other hand, Xperia J is powered with 1 GHz Cortex-A5 Snapdragon processor. Now, this could be quite thorny as the new sibling in Sony family houses just 512 Megabytes of RAM. However, it still offers amazing processing speed.
The advantage here certainly goes to Samsung. After all, boasting twice the virtual memory than its peer makes sense.
2. Display:
No wonder the display of Galaxy Grand takes a rain start. Featuring 5.0 inches, capacitive touch screen at 480 x 800 pixels with 16 M color display can make any tech savvy hold his breath. Enhanced preview of the images and videos on large screen serves great purpose.
Moving to Xperia, the phone braves 4.0 inches, TFT capacitive touch screen 480 x 854 pixels with 16 M color display. So the display quality is vivid and with sharper contrast.
Undeniably it is quiet barbed to raise an advantage to. If you love to have everything over the big screen then certainly Galaxy grand is your choice mate. While if you wish for some vivid clarity then Xperia will quench your savvy need for the same. As of now, it’s a tie!
3. Operating system:
Regardless of the differences between the two, it’s the OS that compensates for their difference. Absolutely, both the Smartphone are powered by Android. However, there’s a hairline difference between their versions.
Galaxy Grand is cored with Android 4.1.2 Jelly Bean OS, whilst the Xperia J is armored with Android 4.1 Jelly Bean OS.
So, if you’re considering the OS as the base of your purchase then it hardly makes any difference when it comes to your choice. Again, it a tie!
4. Camera:
For many tech savvy out there, camera is one the first and foremost feature that anybody gives an importance to while opting for a mobile phone. Over here, the Phablet flaunts 8 Megapixels camera at its rear, supported by LED Flash and various mix bags of features. While, the front part braves amazing 2 Megapixels snapper. Video calls and self portraits are no more a herculean task!
On the other hand, Xperia J features 5 Megapixels camera at rear portion which is however backed by LED Flash. The front VGA camera is nothing much to brag about.
The ball certainly falls in the Samsung’s court for featuring brilliant snappers on either side.
5. Price:
Alas! Price is certainly the most important thing to be taken care of. Talking about the Samsung galaxy grand price, it certainly stands quiet aggressive. However, the price completely justifies all the specifications of the handset. The Smartphone is priced at Rs. 18,999 in the Indian market.
Now when it comes to Sony Xperia J price, it stands quite transparent! The smart phone is priced at Rs. 13,719 which makes it ideal for everyone without breaking their banks.
Verdict:
Alright! The competition between the two peers stand real tough and hard, the problem of choice is certainly no wonder. On the one hand, where Samsung is regarded as the king of Android market, the Xperia series dictate its own legacy. Samsung is regarded as the pioneer of all innovation; Xperia takes up as the best companion. So, should you choose Sony or Samsung? The decision is not easy!