Google recently announce that the new and next version of Google operating system called android “KitKat” instead of Key Lime Pie. For that Google and Nestle made partnership to create the new upcoming and one more sweeter version of Android 4.4 KitKat. Google already create a brand-new Statue of the sweetest version of Adroid Kitkat in the headquarter grounds. Android is now running on more then one billion devices all over the world, and thats making android is the worlds largest used mobile operating system, With all brand-new releases, android becomes world’s leading mobile operating system. 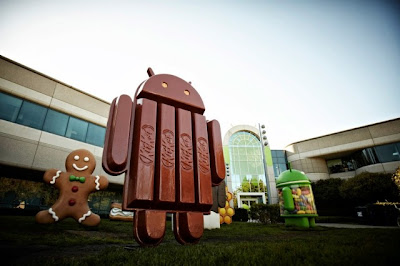 With the new version of android OS Google says that “It’s our goal with Android KitKat to make an amazing Android experience available for everybody. “

and more from the android’s official website Google says that “Android is the operating system that powers over 1 billion smartphones and tablets. Since these devices make our daily life so sweet, As everybody finds it difficult to stay away from chocolate we decided to name the next version of Android after one of our favorite chocolate treats, Kitkat.”
Although no further more details have been released about Kit Kat 4.4, Google did furnish a little details as to what should be awaited, Google don’t announced any features and release date details at for Kiktat, but new version of google is not far off now from us, we know that Google’s trends to release  new version with new hardware and software features to make more easier user experience.
But from the Google new statement “An  amazing Android Experience for everybody” we expect some of features like
So friends what is your opinion about this announcement ? What do you think about the new name of new version “Android Kitkat”?, and what do you think about 4.4 updates and release? And more significantly, what about mobile space, what new features we will see, how end users get benefit, why so quickly after the release of jelly bean 4.3 ?, you give your valuable feedback about this by commenting below.
About Author:
“Piyush is a android application developer and head of Outsource Android Development department and he is working with Aegisisc Software Company, He is also an technical writer and  spend his free to write about new announcement in mobile industries and share his knowledge vai blogging.”
Share