This year brought about many ultra-portable, powerful gadgets. The majority of these devices are slimmer and lighter than their predecessors. They’re all certainly more powerful. What were the best smartphones and tablets released this year? Let’s take a look. 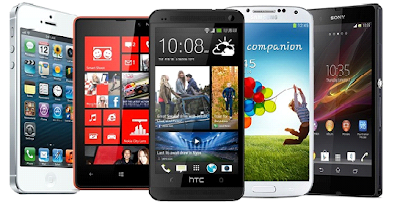 This device has a 5-inch AMOLED, fHD screen that makes everything look brilliantly sharp. It has Qualcomm’s Snapdragon 600 quad-core processor, which is clocked at 1.9GHz, and 2 GB of RAM. It has a 2,600mAh battery that is suited for up to around 11 hours of video playback. The device also has a 13-megapixel rear camera and 16GB of internal storage.
HTC One
This device is comparable to the Galaxy S4. The HTC One has a strong, metal body and a 4.7-inch fHD display. It also has a Snapdragon 600 quad-core processor but is clocked at 1.7GHz rather than 1.9GHz, along with 2 GB of RAM. One unique benefit that the HTC One has is its software changes. The layout is simple and easy to navigate.
Nokia Lumia 1020
The Lumia 1020 has a phenomenal 41-megapixel camera that is unmatched by any smartphone on the market. It even beats out many point-and-shoot and DSLR cameras. The device comes with useful apps so that allows users to harness the camera’s full power. The device can have either 32GB or 64GB of internal storage and has 2 GB of RAM. It has a Krait dual-core processor with a clock speed of 1.5GHz. The AMOLED screen is 4.5 inches.
Sony Xperia Z
This water and dust-resistant phone is thin and attractive with a 5-inch fHD display. It is powered by a Krait quad-core processor, with a clock speed of 1.5 GHz, and has 2 GB of RAM. The Xperia Z has 16GB of internal memory and is powered by a 2,330mAh battery, which offers up to 550 hours of standby time or up to 14 hours of talk time.
Tablets
Google Nexus 7 (2013)
The new Nexus 7 is a great improvement from the older model, which was already a solid tablet. Furthermore, it sells for a slightly higher, but still-affordable, price. The device is thinner and slimmer than the old Nexus 7 and has a 5-megapixel rear camera, a feature that the older model lacked. The device has a Snapdragon S4 quad-core processor, clocking at 1.5GHz, along with 2GB of RAM. It’s available in 16GB and 32GB sizes.
Google Nexus 10
The Nexus 10 was built by Samsung and has a solid build with a rubber back that is difficult to scratch. The screen is made out of Gorilla Glass 2 and has a resolution of 2,048 x 1,600 pixels. The Nexus 10 has a 5-megapixel rear camera and a 1.9-megapixel front-facing camera. It is powered by an A15 dual-core processor and has 2GB of RAM. Internal memory is either 16GB or 32GB.
Samsung Galaxy Note 8.0
This tablet is comparable to the new Nexus 7. The Samsung Galaxy Note 8.0 has an 8-inch screen, with a resolution of 1280 x 800 pixels with 189 ppi. It has a Exynos 4412 quad-core processor, clocking at 1.6GHz. The device has 2 GB of RAM, a 5-megapixel rear camera, a 1.3-megapixel front-facing camera, and a 4,600mAh battery.
This year has been a great year for smartphones and tablets so far, and there’s still a lot to come.

Author info:
“Rohit Reddy is the editor of GadgetResearch. He is a gadget and technology enthusiast and loves blogging about them. In his free time he likes to follow the latest tech news and share it with his friends.”