The Lumia 920 was released last year to be Nokia’s flagship Windows phone. However, the device was seen as being too bulky by modern standards. In just a year’s time, Nokia has redesigned the 920 and have released the Lumia 925 in the Indian market as the new flagship Lumia Windows Phone. Let’s take a look at what’s changed in a year’s time- 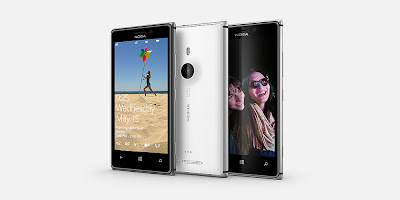 Nokia’s redesign of the Lumia 920 has resulted in the creation of a device that looks like a completely different phone. The first thing that is noticeable is the drastic weight loss that the phone has undergone. While the 920 was thick at 10.7mm and weighed 185g, the 925 is just 8.5mm thick and weighs just 139g, making it a very slim phone and at par with other flagship smartphones in its category.
Nokia has also brought other design changes with the 925. Firstly, Nokia has moved away from complete polycarbonate body of the 920 to a mix of polycarbonate and aluminum body for the 925. Nokia has decided to go with black, white, and grey for the colors being offered for the 925 which is a departure from the loud yellow and red of the 920.
DISPLAY

The Lumia 925 also gets a different screen compared to the 920. Nokia have ditched the IPS LCD display of the 920 and have instead gone for an AMOLED display on the 925. What this means is that users will now receive better color reproduction on the 925 than the 920. In other areas, Nokia have chosen to keep things consistent by having the display at the same 4.5 inches with a pixel density of 332 ppi. The display also sports Corning Gorilla Glass 2 and PureMotion HD+ ClearBlack display. This ensures users get a very rich visual experience when using the phone.
CAMERA

Nokia have also brought improvements to the camera as well for the 925. The camera installed in the 920 was hailed for its superior low light shooting capabilities. In a year’s time Nokia have found a way to enhance this capability to produce better low light pictures. When looking at the MP count on the 925, there is no change between the camera on the 925 and the one on the 920 as both phones carry an 8MP rear camera. The change is seen in the increase in the number of optical sensors that the 925 carries. While the 920 had 5 optic sensors, the 925 has been equipped with 6 sensors. This means that not only do day shots look sharp and crisp, low light photos also look more detailed. It also supports video recording at 1080p @ 30 fps. The 925 also sports a 1.3MP front camera which will allow for good quality video calls.
INTERNALS

The Lumia 925 has been equipped with a dual-core 1.5GHz Snapdragon processor along with an Adreno 225 graphics unit. The dual-core processor may seem underpowered when compared to the quad-core behemoths this phone is against but due to the low processing power required by Windows Phone 8, the power provided by the dual-core processor is enough to keep it running smoothly and efficiently. The 925 has been given 16 GB of internal memory, with no option for expanding memory through SD cards, as well as 1 GB of RAM. The phone comes equipped with a non-removable 2000mAh battery which is not capable of wireless charging out of the box, but instead requires a charging shell to do so.
SOFTWARE

The Lumia 925 is powered by the Windows Phone 8 operating system and also comes loaded with the Amber update. Like all Lumia Windows phones, the 925 comes preloaded with the HERE suite of navigational apps which includes Maps, Drive, and City Lens. So you can scout an area using Maps, travel to the area using Drive, and find places of interest using City Lens, all on your phone. Nokia has also provided Nokia Music with all its Lumia phones and the 925 is no different. Nokia Music is just like any other music player app but it also offers free unlimited music streaming, allowing users to discover new tunes or enjoy their favorites without paying anything. As the main highlight of the 925 is its camera, Nokia have also provided several apps to enhance the photography experience. These apps include Panorama for panorama shots, Creative Studio for photo editing, Smart Camera for group and action shots, and Pro Camera to get the perfect setting for the perfect shot.
AND FINALLY

Nokia have released another Windows powered phone to further their Lumia line-up in the form of the Lumia 925. The phone is a redesign of last year’s flagship, the Lumia 920, but what it brings with it are subtle improvements and enhancements that further alleviate the Windows phone experience while at the same time provide another option for would-be buyers to consider.
Share